MAPFRE AM measures the carbon footprint of investment portfolios

COP26 was held less than a year ago. Claimed to be one of the most important global events for addressing the challenges of climate change and biosphere conservation, the Climate Summit brings together, as always, all the member states of the United Nations. The 27th edition will take place in Egypt this year, with a focus on the future challenges our planet is facing and with special emphasis placed on reducing our carbon footprint.

To this end, in recent years different formulas have been designed to calculate carbon footprint emissions (though the Kyoto Protocol has identified up to six greenhouse gases). This concept emerged, according to the Ministry of Environment, “as a measure to quantify and generate an indicator of the impact an activity or project has on climate change, beyond the major emitters.”

The calculation is thus especially relevant, given that, aside from being dictated by more than one regulatory front, “it serves to show the parameters and monitor the risks associated with climate change, and to elaborate a strategy for reducing company emissions,” explained Javier Miralles, fund manager at MAPFRE AM.

MAPFRE AM, the insurance Group's asset manager that manages nearly 40 billion euros in assets, has its own methodology for calculating carbon footprint emissions in the investment portfolios: “MAPFRE allocates as its own the emissions of the different assets it invests in (debt, mutual funds, ETFs, and others) based on the percentage of ownership it has over those assets.” In the current regulatory context, financial institutions are urged not only to limit the calculation to their direct emissions, but also to extend the calculation to their investments by allocating as their own the issuance of the different assets in which they invest. 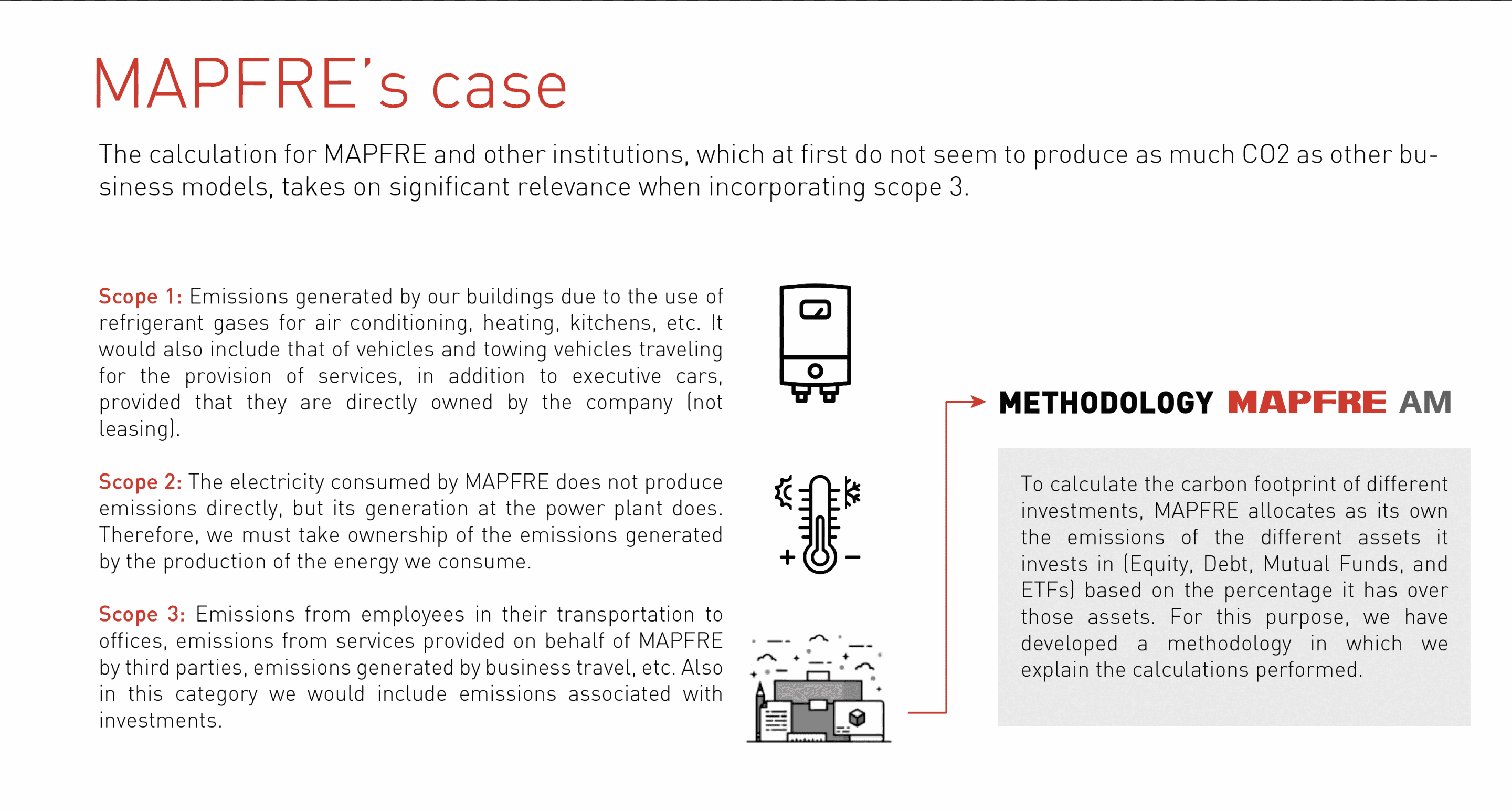 This new methodology, which seeks to complement the calculations already established at the regulatory level, establishes various calculations of the carbon footprint of investments according to the information that is reported and its objectives. To put it briefly, calculations can be established in absolute, relative, or intensity-weighted terms.

MAPFRE AM indicates that, thanks to its methodology, “the most sensible and well-thought-out solution possible was found for optimizing data reporting, providing the most reasonable explanation possible of the calculations performed.” “That's why we must be aware that the first data we report has to be as calibrated as possible, though they will have been obtained with many limitations,” they added.

As explained above, these calculations are included in the regulatory framework. However, according to the experts, “these regulations are not precise enough to perform all the required calculations. “The methodology we’ve described will likely be modified as regulations become more explicit about the issues raised.”

Looking ahead to the future

MAPFRE’s assets manager points out that at present, methods for calculating an investment’s carbon footprint “are in the early stages, both at the regulatory level and in terms of quality and the ability to disclose findings to the actors involved,” and will continue developing so that it can become an adjusted and accurate calculation.

“We’ve encountered a series of problems, most of them theoretical in nature, that require conceptual developments that these regulations do not provide. We have found that there are a large number of assets that, not only at the conceptual level, but also at the level of disclosure, do not provide the data necessary for the calculation,” they added.

In fact, one of the most widespread criticisms of the regulation, which is expressed by many interested parties in their queries related to the RTS (Regulatory Technical Standards), is that it “seems to only focus on and provide calculation suggestions for listed equities and corporate bonds, whereas portfolios are made up of many more asset types,” commented the assets manager. The main problem, they explained, is that “a series of difficulties arise when performing these calculations for other assets that the regulation does not provide for (as is the case with futures, third-party funds, ETFs, or government bonds, for example).”

Thus, it is expected that as the regulation continues to be defined, and as the exact method for carrying out the calculations becomes more specific and access to data is improved, carbon footprint reporting will become more and more precise.