How does rising inflation affect my pension?

Inflation is an extremely significant element in all pension systems, as how it is handled can have a major impact on the pension amount. The risk of inflation is the result of the difference between the criteria for updating the amount of pensions and the rise in the general price level in the economy.

In countries with public retirement systems, this is a risk that is usually assumed by the State, but that is not always the case. Sometimes it falls on the pensioner or on the insurance companies with which the annuities have been contracted, in pension systems based on personal retirement accounts (very common in Latin America).

The recent report by MAPFRE Economics, A Global Perspective on Pension Systems, identifies the risk of inflation as one of the four main risks that public and private pensions face worldwide, along with demographic, financial, and unemployment risk. 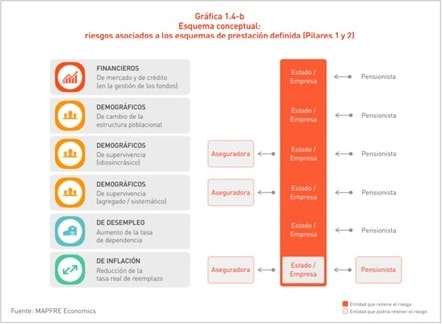 The case study regarding the mechanisms to protect people who reach retirement age from losing purchasing power as a result of inflationary processes is diverse, explains Ricardo González, Director of Analysis, Sectorial Research and Regulation at MAPFRE Economics. “There is a tendency to introduce adjustment mechanisms through which pensions are indexed to the indicators that measure the loss of purchasing power (the consumer price index, salary growth, or a combination of both). However, sometimes they are combined with other indicators related to the sustainability of the system, so that they can be disconnected from time to time when sustainability is threatened.”

An example worth highlighting is the case of the UK pension system, which was designed with a fairly balanced distribution between pillars; that is, the first component, the public pay-as-you-go pension with mandatory contributions (pillar 1), is complemented by an additional pension scheme, funded by contributions made by the employer and the worker throughout their working life (and from the investment returns the funds generate). The company is obligated to register its workers in these supplementary pension plans (pillar 2), unless the worker decides that they want to opt-out (in which case, they lose the contributions that the company and the State make for them).

In this system, the amount of the public pension entitlement (which is a minimum living amount) is uprated according to the greater of CPI inflation rate and average salary growth, with a minimum increase of 2.5%. This uprate mechanism is called “Triple Lock”. Recently, however, the British government has announced that in 2021 it will be suspending that system and that the revaluation of pensions will be 2.5%, in which case, part of the burden of the rising inflation that is happening will fall on the pensioners.

In the case of pension components based on personal retirement savings accounts (which have a lot of weight in systems in countries like the United Kingdom, the United States, Sweden, the Netherlands, and others; and in all the pension systems in Latin America that follow the Chilean system in one way or another), everything will depend on how the inflation and interest rates evolve. “If a situation of negative real interest continues, the cost of inflation will have an impact on accumulated savings and, therefore, on future pensioners, who will see that the performance of their investments is not profitable enough to compensate for the loss of purchasing power of their savings.”

This can happen to a greater extent in economies where the central banks intervene in the bond markets with unconventional monetary policy measures with extensive asset acquisition programs that lower the risk premiums on the bonds that the programs are applied to, and therefore, their profitability. “These programs are being very effective in guaranteeing liquidity in the system and are enabling governments to continue financing themselves at reduced rates, so it is important that they remain in place until the situation improves. But in the long term, it can erode the purchasing power of the future pensioners, with regard to the personal retirement savings component.”

As a collateral effect, it can lead those who save and/or pensioners to assume more risk in their investments in search of greater profitability, in a way of saving that, due to its purpose, ends up being a conservative savings, which is not free from problems if the markets are down at the time they reach retirement age.