Little by little, the world economy seems to be seeing the light at the end of the tunnel. Progress with vaccinations and the relaxation of the harshest restrictions have partly opened up economic activity and allowed certain sectors that have been severely affected in recent months to stabilize.

However, the reality is more complex than it would appear. As the recovery continues, the Economic and industry outlook report, prepared by MAPFRE Economics, explains that several risks could jeopardize global economic sustainability. Aspects such as pandemic control, political instability in emerging countries and climate change are just three of the many challenges facing global powers and emerging countries in the coming years.

With Biden's arrival, American foreign relations are less strained, demonstrating the new President's intention to find common ground with political leaders like Vladimir Putin and temporarily halt tariffs with the European Union, though the United States' critical gaze continues to be directed at China.

In Europe, despite the ongoing Brexit-related trade dispute and recent developments in Hungary, the release of NGEU funds is fostering the idea of greater fiscal unity in the eurozone.

With regard to emerging countries, the report clarifies that current concerns are more about "the social mobilizations and protests that began before the pandemic" and that have resumed in countries including Chile, Ecuador and Bolivia. Added to this is people's discontent over measures brought in to address the health crisis in Latin America, which increased inequality and left certain sectors and workers unprotected.

The report highlights that 2020 closed with a level of debt not seen since World War II: 290.5 trillion dollars. With this huge figure, the first quarter of this year saw a fall of 1.7 trillion dollars, mainly boosted by developed economies. "The non-financial private sector has been primarily responsible for the deleveraging process in these markets, which is also aided by the financial system," the report adds.

In this vein, the reinvestment risk could rise—and at a sharper rate in advanced economies—as the pursuit of inflation protection and monetary reaction returns to normal. With this, debt sustainability could weaken certain countries' economic recovery by returning to a path of greater fiscal discipline. 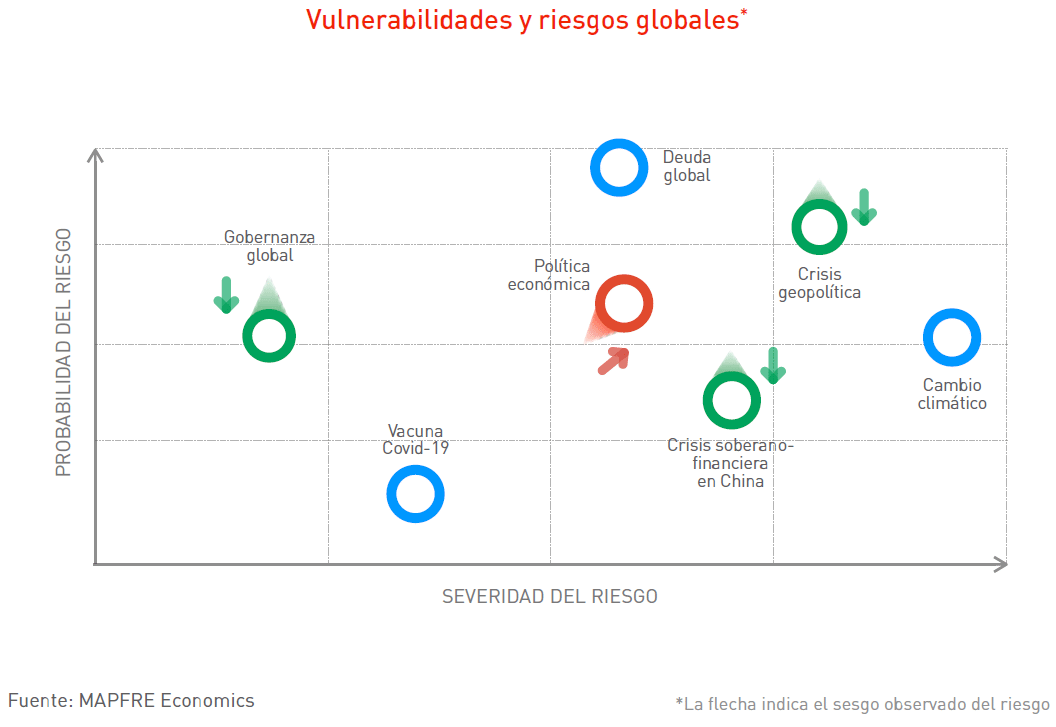 China remains at the forefront of the global recovery. As well as having a strong manufacturing industry and a solid export position, MAPFRE Economics states that the Asian country has strengthened its domestic demand following a stagnant period, allowing it to add a new buttress to its economy.

But the danger of a possible overheating of the economy, stemming from growing concern about the credit expansion promoted by the Chinese central bank, could push the country to pursue deleveraging policies through interest-rate hikes and tightening other monetary policies.

As restrictions have eased and demand has picked back up again, inflation has stabilized after a rebound effect. Despite this, factors such as bottlenecks or shortages of certain goods could jeopardize this trend, the duration of which could guide future policies toward further tightening.

In this respect, "bond markets would anticipate that such tightening would be minimal." Although the most short-term decisions lie in acquiring assets, as banks revise interest rates upward (in order to gain some margin for the forthcoming monetary adjustments), bad policy signs could appear in debt markets until balance is achieved in the rates.

On the fiscal side, guidelines remain expansionary, supported by a more lax monetary policy. Even so, prolonged tightening of financing conditions could compromise such policies, "erring more on the side of financial stability."

During the pandemic, institutional relations between governments have remained mainly unchanged, thanks in large part to widespread vaccine diplomacy, the eurozone's ability to put out the fire of euroskepticism and the easing of tensions in the Persian Gulf.

In this context, MAPFRE Economics notes that political instability in emerging countries, rising social discontent in Latin America and the intense conflict between Israel and Palestine could destabilize geopolitical relations.

The environment has been an issue on every agenda in recent years, although little progress is being made in tackling the climate crisis. The arrival of COVID-19 and the need for countries to reach agreements to mitigate the spread of the virus put forward the possibility for governments, businesses and citizens to make use of this time to coordinate and approve measures to address the environmental emergency.

The current situation requires rapid and effective measures, where insurance, by standing up for sustainability, offers a point of support both in investment in ESG and in the insurance business itself.

With vaccination programs making very speedy progress and the removal of many of the mobility restrictions, the spread of the delta variant among young people (the age group with the lowest percentage of vaccinated individuals) and those who aren't fully vaccinated could threaten the global strategy.

Despite the high effectiveness of vaccines so far, the emergence of new, more contagious and virulent strains could delay the process of herd immunity (several countries are increasing the percentage for herd immunity), resulting in new lockdowns and restricted freedoms.