Looking at the early months of the year, emerging countries—and more specifically those in Latin America—have experienced a decline in equities, along with significant exchange rate depreciation and concerns over widening sovereign spreads. Similarly, in terms of capital flows, by the end of March net portfolio disposals had reached levels superior to those seen during events such as the 2008 crisis, the 2013 Taper Tantrum, and the volatility of the Chinese stock market in 2015. The Economic and Indrustry Outlook report, elaborated by MAPFRE Economics, points out that as a result, a tendency toward risk aversion has returned to the Latin American market.

With the green shoots of global economic recovery starting to show, monetary and fiscal policies—those of both advanced and emerging economies—initially served as a countercyclical stabilizing instrument to minimize the effects of the economic shock.

Though no structural imbalances were recorded in terms of payment balances, the previous negative dynamics once again appeared in South America in the second half of last year. For countries such as Brazil and Colombia, their respective currencies suffered a sharp depreciation during the second half of 2020 — an effect that was exacerbated by factors such as social unrest in Colombia, electoral tension in Peru, and the Brazilian variant of COVID-19, among others. 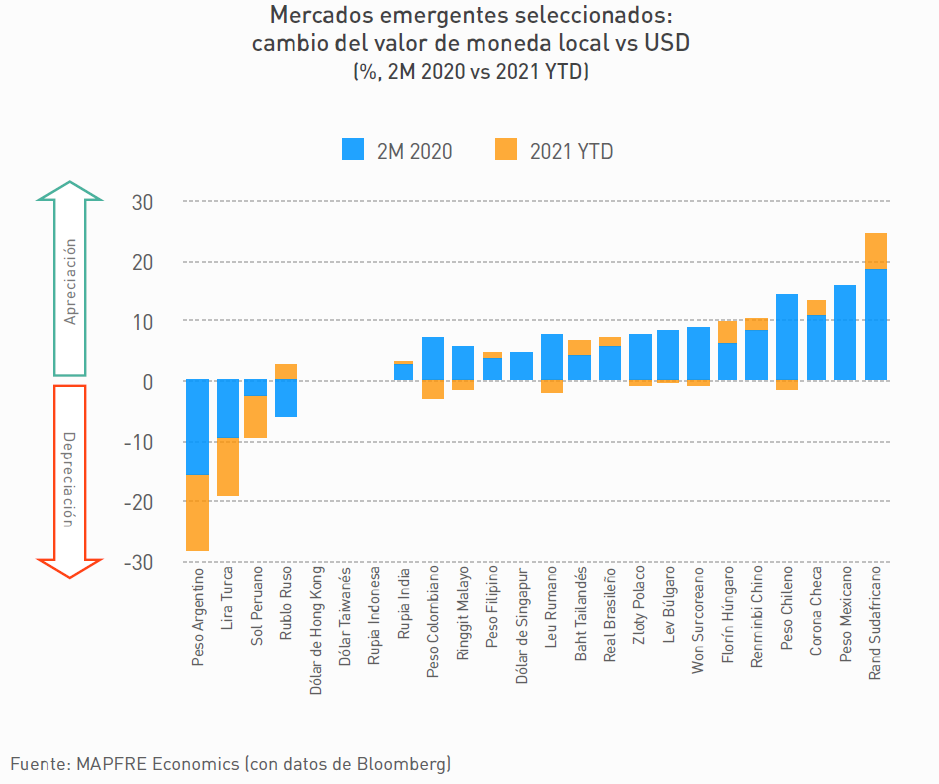 Besides these contributing factors, the most decisive influence was the region's inability to recover lost ground: “As the world entered a new phase of the pandemic with a relaxing of restrictions, Latin America was unable to contribute to or benefit from the global value chain”, report affirms. As a result, the depreciation of local currencies was most pronounced in countries like Argentina, Brazil and Colombia, where the fiscal space needed to counter the effects of the coronavirus was narrower, leading to fiscal sustainability issues for these nations.

In such an uncertain and complex economic environment, the region’s currencies suffered a severe setback, which, according to the dossier, was exacerbated "by not being able to join the revival of the commodities price cycle".

Even with the enormous effort made by emerging economies over the past year, Latin American countries are in the most precarious situation, with much higher foreign debt, capital movements similar to those seen amid the 2008 financial crisis and relatively stable exchange rates thanks to the maintenance of reserve levels and the fact that current account balances remain positive. Moreover, the continual social upheaval and political instability that defined the region's pre-pandemic landscape have regained prominence after having retreated somewhat to the background during the crisis.

Nonetheless, MAPFRE’s Research Department forecasts for the recovery of economic activity remain positive, supported by the rising prices of raw materials, the current favorable financing conditions, and a return of capital flows that—though still a long way from returning to pre-pandemic levels—show optimistic expectations. Given the above, issues such as a lack of protective measures for informal economic sectors, the widening inequality gap and the institutional deterioration of governments could put a strain on financial markets and slow the pace of recovery in South America.