Results in Europe: a low margin of safety

The first quarter earnings season has reached its halfway point. Expectations, as usual, are at an all-time high in the market. The war in Ukraine has significantly worsened the macroeconomic base model established in the start of the year for the old continent. Generally, European companies have minimal direct exposure to Russia and Ukraine. However, the second consequence of the controversy—inflation remaining steady from the expected and low growth caused by the reconfiguration of the global energy supply chain—assumes a significant amount of uncertainty about the future of the economic cycle and thus the future development of corporate profits, which investors shouldn’t underestimate.

The reopening of economies, in the absence of new flare-ups, will continue a positive trend, especially in the service sector. However, the industrial sector should already be demonstrating signs of depletion. The Eurozone Manufacturing Purchasing Managers’ Index (PMI) has peaked and remains at the lowest level compared to 15 months ago, showing a slow growth as a result of the sudden spike in energy expenses and the severity of the supply chain problems caused by the Ukraine war. Additionally, the rise in cost of living strains the internal demand in the future months, causing companies’ to transfer the costs to the end consumers.

On the other hand, the risk of a severe energy supply crisis happening in Europe still looms if a total and immediate ban on imported Russian oil and gas is applied. According to this eventual scenario, the potential of an economic recession will spike because of Europe’s high energy dependency on Russia (40% of the EU gas imports come from that country), which prevents short-term substitution supply of alternate resources. 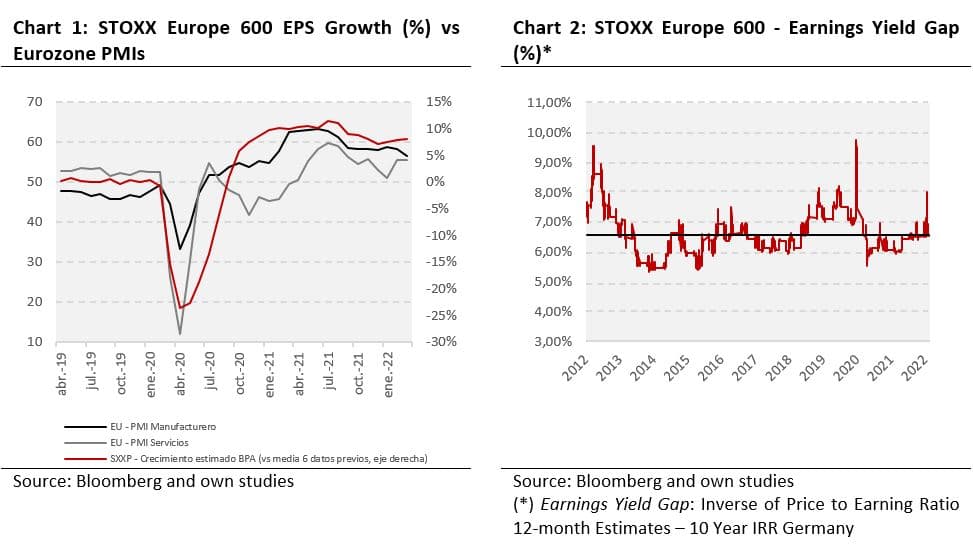 Despite the significant uncertainty, the 2022 earnings per share (EPS) estimate of the STOXX Europe 600 Index is currently at 8% over the rate estimated at the beginning of the fiscal year (before the war). So, about a 10% EPS growth is expected from last year. This modification to the incline is basically due to the energy sector, where the estimated profits of the current year have been revised to +60%, given the rise of raw material costs. However, regarding the other sectors, the banks quickly noticed the decline in their estimates since the beginning of the year.

The estimates are anchored to the opinions, or guidance, that the companies provided in last year’s fourth quarter earnings publication. So, we believe that the focus in the following weeks is to determine if these are reliable enough to maintain those perspectives. Today, the current risk premium of the European stock quote (Earnings Yield Gap of STOXX 600 as proxy), aligns with the historical average of the last decade. The market is beyond contemplating a potential return to low-profit estimates for the rest of the year, but that risk is still significant.

No easy way out for the ECB

Ancient Greeks devoted a huge time and effort to solve the squaring of the circle. Ultimately, it was impossible with the means they had but those efforts contributed to make big progress in thought and science.

“The market’s not looking good, but it’s no reason to go on a crazy selloff”

During the week, panic selling has been the main feature on the stock markets.

The perfect storm? Similarities to the 2011 crisis

When I was young, I loved the movie “The Philadelphia Experiment (1984)”, where several U.S. Marines, in the middle of World War II (1943), traveled through a storm caused by an advanced technological experiment that transported them into the future, to the 1980s. In this context, the movie tells the story of their setbacks in returning to their natural historic moment.